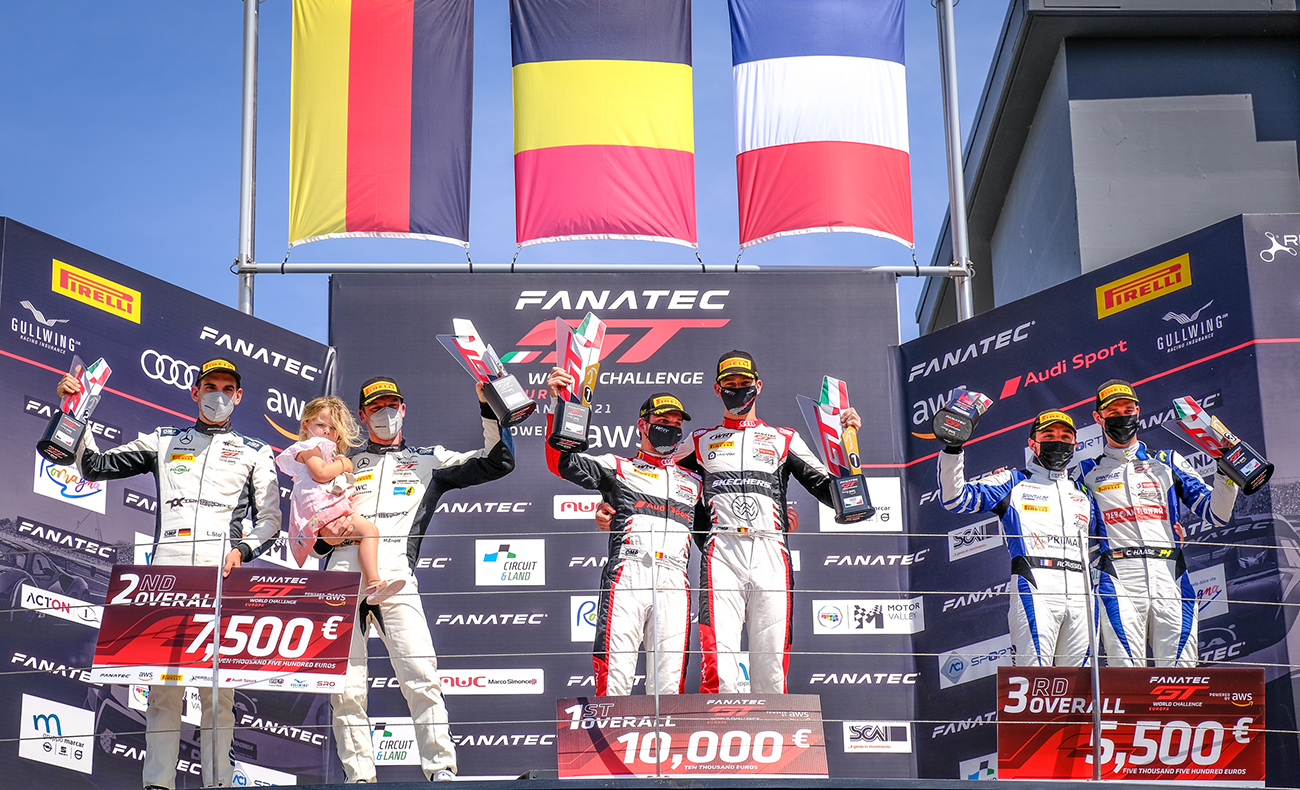 Mercedes-AMG Team Toksport WRT made the star shine at the Sprint Cup of the GT World Challenge Europe in Misano, Italy: Luca Stolz and Maro Engel celebrated a podium finish in the first race at the Misano World Circuit. In the second race, the Mercedes-AMG GT3 was again in a promising position before an incident dashed hopes of another podium finish. Oscar Tunjo and Juuso Puhakka, piloting the second Mercedes-AMG GT3 from Toksport WRT, finished in the top 10 in both races.

In qualifying, Luca Stolz grabbed seventh place on the grid for the first race, where the German once again demonstrated his skills. In the first corners, Stolz pushed forward to fourth position, rather overtaking another competitor for third place a few moments later. At the half of the race, the 25-year-old handed over the Mercedes-AMG GT3 to Maro Engel. With a fast pit stop the duo slipped forward to second place, which the German took to the finish line in commanding style.

On Sunday, Maro Engel steered the Mercedes-AMG GT3 through qualifying. As on the previous day, the 35-year-old finished seventh on the grid but dropped back to eighth at the start. Once again, the duo performed well at the driver change and the GT3 bolide occupied fifth place after the pit stops. Unfortunately, there was a slight contact with a competitor in the fight for fourth place which resulted in a puncture.

Although the team reacted quickly and changed the tire within a very short time, Luca Stolz ultimately dropped back to 24th overall. In the overall Sprint Cup standings, Maro Engel and Luca Stolz hold fifth place, the gap to the leaders grows to 42.5 points.

Important points for Tunjo and Puhakka
For Oscar Tunjo and Juuso Puhakka, who shared the second Mercedes-AMG GT3 of Toksport WRT, the weekend in Misano went satisfactorily. On Saturday, Tunjo started the race from tenth on the grid. The Colombian had to drop a few places before handing over the cockpit to his teammate. Juuso Puhakka put in a good performance and drove the Mercedes-AMG GT3 across the finish line in tenth position overall, which also meant third place in the Silver Cup.

In the second qualifying session on Sunday, Juuso Puhakka finished in eleventh place. In the turmoil of the first corners, the Finn lost two positions, so that he handed over the Mercedes-AMG GT3 to Oscar Tunjo in 13th place. Thanks to a perfect driver change, the Toksport duo slipped up to tenth place. At the finish, the two Mercedes drivers took ninth place overall and third in the Silver Cup. In the overall Silver Cup standings, the duo is sixth overall after the two races in Misano.

Two events for the Sprint Cup of the GT World Challenge Europe are still planned for this season. First, teams and drivers will start at Brands Hatch in the UK (August 28-29) before the finale takes place about a month later at Valencia (September 25-26).